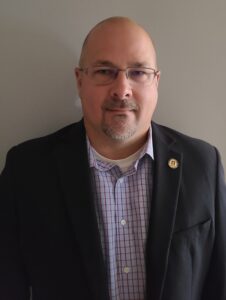 My name is Joe Bludeau SFC, USA (Ret.)  I served in a combination of active and reserve Army components for approximately 17 years before my medical retirement as a Sergeant First Class (SFC/E-7) in late 2017 due to SCD (Multiple Sclerosis). I started my career in the Air Defense Artillery (ADA) in 2001 and reclassified as a Paralegal Specialist in 2005 in the Army JAG Corps where I spent the bulk of my career. I had my initial Multiple Sclerosis (MS) attack in 2007 and subsequent diagnosis in 2012.

In my civilian capacity I started as a civil servant w/ the Dept. of the Army in Oct 2005 as a legal assistant and transferred to the Dept. of Veterans Affairs in Aug 2010 as a Senior Paralegal Specialist working in the procurement of Information Technology (contract law) where I continue to work today. Throughout my military and civilian careers, I have worked in a myriad of law fields such as: legal assistance, military justice/criminal law, operational law, MEB/PEB representation, claims, & procurement/contract law.

A family-member has fought in every war since our immigration to U.S./Texas & the Spanish-American War. My war-time service was in Afghanistan/OEF (2008-2009) at Forward Operating Base (FOB) Sharana.  My son continues this family tradition of military service today and is active-duty Army currently serving as an Air Traffic Controller AIT instructor at Ft. Rucker, AL. Veteran’s rights are something I strongly believe in given my family’s history & my personal status.  This is also reflected by civilian position w/ the DVA where I strive every day to improve the agency from within. As one of the ‘Big 6’ Veteran Organizations I believe that we have an immense obligation & noble ability to make positive impacts on the lives of those who have given so much for our country.